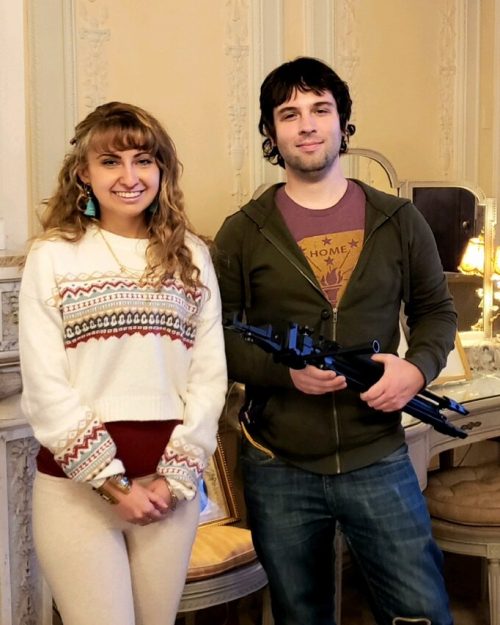 Kayla Vasilko and Tony Panek filming at the Barker Mansion

Kayla Vasilko, English major, earned a $1,500 Student Service-Learning Grant for her work honoring the life of Anita King. The project will be on display at the LaPorte County Historical Society Museum and celebrates the life and legacy of silent film actress Anita King, who was born in Michigan City.

Vasilko first heard the story of Anita King from her English professor, Jerry Holt. Upon discovering King was the first woman to drive cross country alone without a man, was a race car driver, race horse owner and did all of her own stunts in film she was determined to bring her accomplishments to light.

She stated, “I learned that there was very little written about King and she certainly didn’t have the recognition she deserved in her hometown.”

Vasilko later connected with history professor, Mary Beth Connolly who helped her to finish up the project and forge community relationships.

“To never let someone else tell them they aren’t good enough, they can’t do something, or something isn’t possible.”

The exhibit will be on display May 1 through July 30 at the LaPorte County Historical Society Museum and will feature items such as a Kissel Kar, photos and newspapers from Anita’s life, posters from her movies, some of her original silent films and a creative non-fiction documentary Vasilko filmed at the Barker Mansion.

“I learned that there was very little written about King and she certainly didn’t have the recognition she deserved in her hometown.”