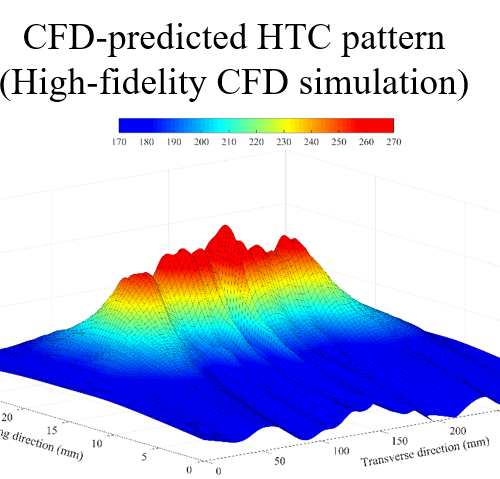 Efficient heat removal without compromising steel strength and quality during secondary cooling process requires accurate casting control and dynamic adjustment of spray water flow rate. In practice, HTC on steel surface has been adopted as an indicator to quantify the spray cooling rate and has also been served as one of the critical boundary conditions for solidification calculation. Experimental-based HTC correlations haven been widely used across the industry to predict HTC values under different operating conditions, but the development process is labor intense and can only cover a limited range of operating conditions.

As an alternative, the SMSVC secondary cooling team proposed a numerical approach to efficiently generate HTC correlations within a relative short period of time. With the aid of high-performance parallel computing, the high-fidelity three-dimensional CFD model developed in the numerical simulation stage features on the simulation of the most important physics during secondary cooling process, such as atomization, droplet breakup, and droplet-steel impingement heat transfer. The magnitude and distribution of HTC on slab surface were correlated with eight representative operating parameters through regression analysis.

CIVS team also developed a graphic user interface to facilitate the on-site off-line application. The calculated HTC distribution is stored in the versatile comma-separated values (csv) format and it can be directly applied to solidification calculations. The high-fidelity prediction software is expected to benefit the steel industry by allowing more accurate dynamic casting control.

The webinar was organized by the AIST’s Digitalization Applications Technology Committee and it features on a variety of digitalization applications-related topics that were originally scheduled for presentation at AISTech 2020.