CIVS supported a number of student activities during the summer in order to introduce young people to the fascination of engineering and to stimulate their interest in engineering.

On June 20 and July 11, BP Summer Engineering camp orientations were held in the Immersive Theater at CIVS. Around 60 middle school and high school students attended the orientation. On July 26, over 50 freshmen of PNW took a tour at the CIVS as a part of the new student orientation. During the stay, the teenagers listened to the introduction about CIVS’s missions and ongoing projects provided by CIVS researchers. Then, they experienced the real-world safety simulator by using the Virtual Reality and Augment Reality headsets. 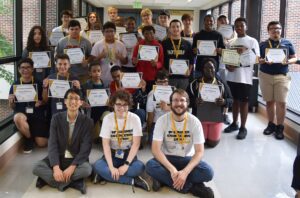