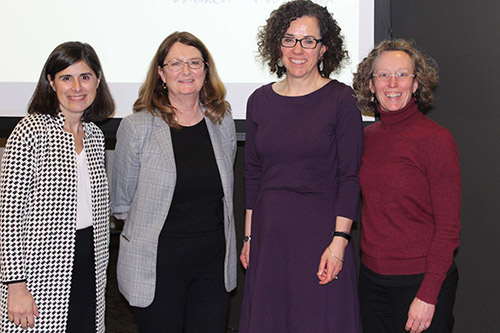 The success of the women’s suffrage movement depended on a combination of money, the quest for racial equality and the desire to improve conditions for working women.

Joan M. Johnson, the faculty director at Northwestern University, emphasized the important role that three women played in gaining approval of the 19th Amendment to the U.S. Constitution, which extended the right to vote to women. Johnson spoke to a group of students, faculty members and community members on March 2 in commemoration of the 100th anniversary of the amendment’s ratification in 1920 and PNW’s celebration of Women’s History Month.

In the decade before amendment’s approval, Alva Vanderbilt Belmont, former wife of the grandson of railroad and shipping magnate Cornelius Vanderbilt, provided financial support for the effort. Business leader Irene Moorman Blackstone insisted that the suffrage movement include black women and union leader Rose Schneiderman argued that improving conditions for working women was predicated on their having the right to vote.

Johnson, a former history instructor at Northeastern Illinois University, said the women who campaigned for suffrage risked physical harm and that they did not always agree on how to achieve their goals. Belmont, especially, struggled with including black women as beneficiaries.

Johnson noted that the legal right to vote acquired by women in 1920 did not extend in practice to black women in the South generally until after the passage of the Voting Rights Act of 1965. In 2017, she published Funding Feminism: Monied Women, Philanthropy, and the Women’s Movement, 1870-1967.