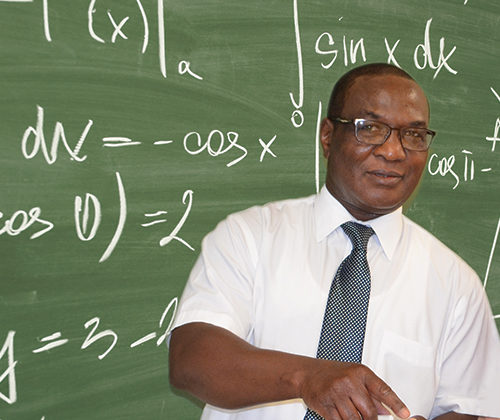 Math Heard Round the World

His research consists in solving problems related to Diophantine equations. He has published more than 110 papers, with more than 30 collaborators. One of his papers solves an important conjecture, which states that there does not exist any Diophantine quintuples.

He has given talks in many countries around the world such as Benin, Canada, China, Croatia, France, Hungary, Mexico, South Africa and South Korea. Professor Togbe not only shares his love of Mathematics with his PNW students but also to students and young researchers in underdeveloped countries. With his friends, he travels to many underdeveloped countries to encourage and teach Mathematics and research. He is mentoring many Ph.D. students of Algeria, Benin and Ghana.

Professor Togbe has been the chair of the Mathematical American Association, Indiana Section and he is the current chair of the Faculty Research Board of PNW.