Get to Know Dr. Zinaich! 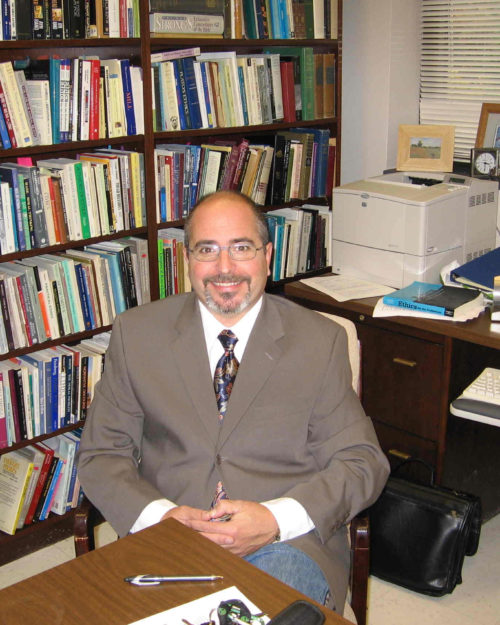 For the past twenty years, Dr. Sam Zinaich has been teaching philosophy at Purdue Northwest. Dr. Zinaich found a home at Purdue Northwest in 1998, and has been hard at work since then to ensure that students analyze and critically assess all the information presented to them.

Born in Buckhannon, WV, and raised in Stuart, FL, Dr. Zinaich’s journey into academia started at Covenant College, in Lookout Mountain, GA. It was at Covenant College that he obtained a degree in Biblical studies and a minor in Philosophy. Following a brief stint in the military, Dr. Zinaich went to graduate school at Bowling Green State University, in Bowling Green, OH. There he obtained a masters in philosophy and was then accepted into the PHD program.

While working on his dissertation, Dr. Zinaich began work as an adjunct instructor at the University of Toledo and Owens Community College. He remained an instructor there until 1997, and then moved on to Fort Hayes University in Kansas for a year. In 1998, he joined the faculty of Purdue Northwest, then known as Purdue University Calumet.

Dr. Zinaich teaches a variety of philosophy courses at Purdue Northwest, ranging from Introduction to Philosophy, to Ethics for Professions, to Principles of Logic, while also having taught Ancient Greek Philosophy. He sees himself as a “history of philosophy kinda guy” after having really taken to the historical aspects of philosophy.

When it comes to his outlook on philosophy, Dr. Zinaich wants students to understand that they can think for themselves, and that they can stand up and take ownership of their ideas and their own lives. He wants them to know they can become autonomous, independent, and effective in their lives, work, and relationships.

In regard to his desire to help students, Dr. Zinaich said “Philosophy is, in a sense, a way of empowering a student. To give them a sort of intellectual and moral strength, to be independent thinkers, and creative, and learners, and people who love to discover things.”

Dr. Zinaich keeps himself busy not only with teaching, but also in serving as PNW’s Philosophy Coordinator. In addition, he serves as the Associate Executive Director of the National Philosophical Counseling Association. Working with the association’s founder and director, Elliot Cohen, Dr. Zinaich has found himself in a role where he is able to help with providing certification and training for philosophers to act as consultants for people having philosophical problems.

In his spare time, he is a Civil War buff, collects art, and has trained in martial arts. If you get the chance, check out some of his publications. Ethics for the Professions, co-authored with John Rowen, was published in 2001. Philosophy, Counseling and Psychotherapy, is an anthology published along with Elliot Cohen. John Locke’s Moral Revolution: from Nature Law to Moral Relativism was published in 2006.

He is currently working on a book titled A New Contemporary Introduction to Professional Ethics, which will be available through Kendall Hunt Publishers soon. He also has a book contract with Lexington Publishers to publish a new text called Natural Law, Legal Positivism, and Legal Naturalism.

Don’t be afraid to stop by and chat. Ever the enthusiast, Dr. Zinaich loves chatting about philosophy!

“Philosophy is, in a sense, a way of empowering a student. To give them a sort of intellectual and moral strength, to be independent thinkers, and creative, and learners, and people who love to discover things.”