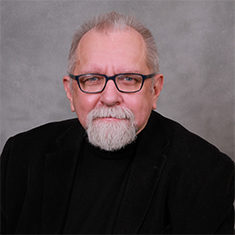 As a Europeanist, Janusz Duzinkiewicz teaches the survey courses in European history and the history of Western thought and values.

Duzinkiewicz’s research is focused on the gente Ruthenus, natione Polonus (“of the Ruthenian people and the Polish nation”) phenomenon but will be returning to an earlier focus on the Four Years’ Parliament, 1788-1792 and the Polish Constitution of May 3, 1791.

Our three Polish Lowland Sheepdogs, Czarka, Przemek and Wandzia, have profoundly changed my relationship with the universe. And despite persistent pressure, I have succeeded in maintaining the traditional pronunciation of my name. [ ≈ YAH-noosh Doo-zheen-KIEV-eech]

Fateful Transformations: The Four Year’ Parliament and the Constitution of May 3, 1791. (Boulder: East European Monographs, 1993) distributed by Columbia University Press.

Duzinkiewicz teaches the three classic periods of Western Civilization: ancient, medieval and modern and the Great Issues gateway and capstone courses for the Bachelor of Liberal Studies program.