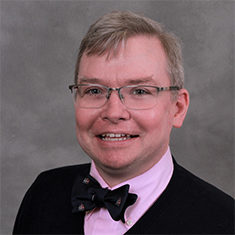 Michael J. Connolly is professor of history in the department of history and philosophy. His teaching and research involve the politics and political economy of nineteenth century America.

He is currently working on two books, a biography of President James Buchanan and the history of American Jacobitism in the Victorian Era. He also writes a monthly essay on American history for the online journal Imaginative Conservative.

In high school and college, I worked as a tour guide at the House of Seven Gables in Salem, Massachusetts. I also worked one summer as a US Park Ranger at the Salem Maritime National Historic Site and dressed up as Nathaniel Hawthorne for their July 4 celebration. Lots of fond memories of the Witch City!

History has rendered its verdict upon him: The Franklin Pierce Statue Controversy, Journal of the History of the Gilded Age and Progressive Era, Vol. 12, 2 (April 2013), 234-259.

Connolly teaches a diverse number of classes, reflecting his interests in American railroads, the Industrial Revolution, New England, the history of conservatism and World War I.