The larger award is part of a region-wide grant application led by the Northwest Indiana Forum to fund projects outlined in the Forum’s “Ignite the Region” economic development plan.

“Susan and I have dedicated our gifting to two causes: medical research and the education of students studying engineering and technology,” David Roberts says. “When PNW Chancellor Tom Keon and Dean Niaz Latif approached us about the opportunity to invest in the Impact Lab, it took very little time for us to say yes to the opportunity to create a place for students, educators and entrepreneurs to collaborate on innovative ideas and concepts that will strengthen the manufacturing base in Northwest Indiana.”

The Robertses’ gift is a significant investment in PNW’s resources and education, as well as Northwest Indiana, in reaching a goal to transform the area into an economic hub, with PNW leading the way as the area’s premier metropolitan university.

“David Roberts has been championing our cause and has been an integral part of PNW for a long time,” says Niaz Latif, dean of the College of Technology at PNW. “We feel he has the passion and commitment for this development and for making changes in people’s lives where he grew up. He benefited from a PNW education and he wants to give back. He believes PNW will deliver what it promises.”

An impact lab of this magnitude has long been a vision of Purdue Northwest Chancellor Thomas L. Keon as an economic driver for Northwest Indiana and greater Chicagoland, one that leverages existing talent and resources at an engaged, high-quality university to attract capital and create new industries and jobs.

“This is just the beginning,” Chancellor Keon says. “To see this concept earn the necessary funding for development and take our metropolitan area to the next level is extraordinary and exciting. Purdue University Northwest maintains its core mission to develop talent and transform our region through our students, faculty and staff. PNW’s existing, invaluable human resources will significantly contribute to external constituents’ business ideas and goals. We look forward to opening the doors to this economic engine.”

PNW adds nearly $746 million in total income to the Northwest Indiana economy, according to an economic impact study completed in Fall 2021. The university supports nearly 10,494 jobs in Lake, Porter, and LaPorte counties.  The university’s educational and engagement activities, including those extended through its alumni, account for 2% of NWI’s gross regional product. One out of every 36 Northwest Indiana jobs is supported by PNW.

When PNW Chancellor Tom Keon and Dean Niaz Latif approached us about the opportunity to invest in the Impact Lab, it took very little time for us to say yes to the opportunity to create a place for students, educators and entrepreneurs to collaborate on innovative ideas and concepts that will strengthen the manufacturing base in Northwest Indiana.


Functions Served at the Impact Lab

The Roberts Impact Lab at PNW will serve as a regional hub for Northwest Indiana to spur new economic development, including but not limited to:

“Unlike a traditional incubator, which is typically limited to developing new concepts and bringing them to market, the Impact Lab will also work with existing businesses on ‘intrapreneurship,’ allowing them to interact more closely with experts and entrepreneurs in an environment free of internal constraints,” says Matthew Wells, director of External Engagement and Partnerships at PNW.

“The idea of creating products and developing people that will ‘Ignite the Region’ was the major driving force in our decision,” David Roberts says. “I began my work career in Northwest Indiana 50 years ago and at that time, the region was a manufacturing powerhouse. Hopefully the Impact Lab will help it return to its former stature.”

The university is currently evaluating potential sites near the Hammond campus and located within vibrant commercial corridors.

The lab will have an advanced manufacturing technology laboratory, makerspace, scientific research and development space, all of which will be overseen by PNW faculty with expertise in areas needed to support clients’ business needs.

The Robertses previously gave generous donations to Purdue Northwest to fund construction and refurbishing work for the David Roberts Center for Innovation and Design and the Commercialization and Manufacturing Excellence Center (CMEC).

David Roberts, a Steger, Illinois native, earned his bachelor’s degree in Technology with distinction from the Purdue University Northwest Hammond campus in 1974. He went on to serve in manufacturing, engineering and general management positions at the Budd Company, Pitney Bowes and FMC Corporation. Roberts served as group vice president with the Marmon Group, LLC, CEO of Graco, Inc. and finally CEO, president and chairman of Carlisle Companies, Inc. before retiring from the company in 2020. 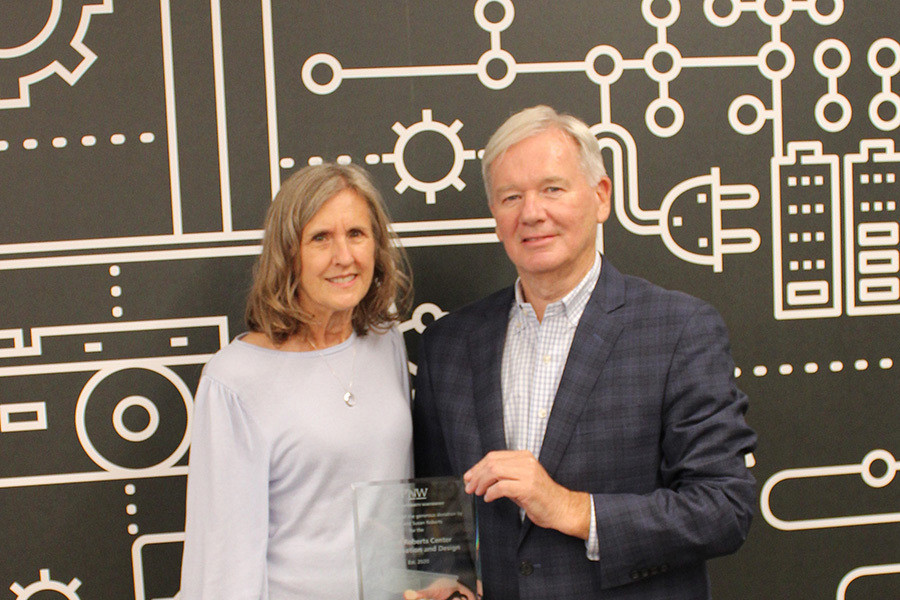 The Roberts Impact Lab at PNW will add to an outstanding collection of community-facing centers that lean on PNW faculty and staff expertise in developing strategies and solutions for clients.

CMEC, which consults entrepreneurs in product proposals and bringing goods into the market, has helped generate more than 40 patents and more than 20 Simple Agreement for Future Equity (SAFE) contracts with commercial ventures in just under three years.

The Center for Innovation through Visualization and Simulation (CIVS), which specializes in creating interactive virtual and augmented reality models to develop virtual solutions and prototypes, has helped generate tens of millions of dollars in cost savings and efficiencies for the Northern Indiana Public Service Company (NIPSCO) and a consortium of steel producers.

The Roberts Impact Lab at PNW will leverage and scale these existing strengths and synergize their programs in partnership with entrepreneurs and existing corporations.