Ready for alerts? Throughout the week, PNW will be conducting tests of the university's emergency communication channels. 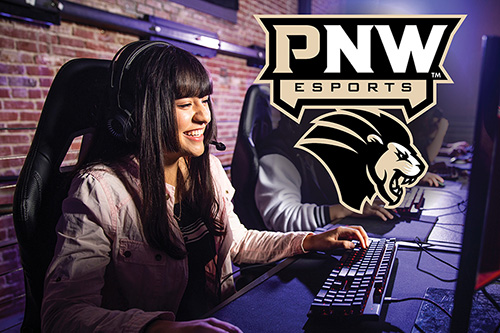 The Purdue University Northwest Pride today announced the addition of Esports as PNW’s 14th varsity athletic program. Esports – a competitive, organized, and multiplayer online video game competition – is among the world’s fastest growing sport at the collegiate level. In fall 2020, PNW will be the first public university in Indiana to offer Esports at the varsity level.

“I am excited to launch Esports at PNW,” said Director of Athletics Rick Costello. “The growth of Esports is amazing and this sport provides competitive, social engagement, and educational opportunities for our students, faculty, staff, alumni, and the Northwest Indiana community.”

Kenneth “Chris” Holford, dean of the PNW College of Engineering and Sciences, said, “Beyond the broad popularity and enthusiasm around Esports, we believe that the launch of this co-curricular activity will allow us to highlight connections to our strong academic programs in science, technology, engineering and math (STEM).”

Interim Provost and Vice Chancellor for Academic Affairs Niaz Latif added, “More than 170 colleges nationwide have introduced Esports programs. Like other athletics programs, Esports fosters development of teamwork and critical and analytical thinking. PNW is connecting academics and athletics in yet another way.”

“Esports is a billion-dollar business and can enhance many career opportunities for our students – including management, marketing, game design and production, broadcasting and event management, and health care,” said PNW Chancellor Thomas L. Keon. “Like other competitive sports and co-curricular activities, Esports offers one more way PNW promotes the education and development of students.”

The PNW Pride Esports team will be developed as a co-ed sport and begin competition in fall 2020. Possible games for competition include Fortnite, Hearthstone, League of Legends, Overwatch, Rocket League, and many more.

Esports arenas will be developed in the student union buildings on both PNW campuses in Hammond and Westville, located in Northwest Indiana near Chicago and the Indiana Dunes National Park. The arenas will feature 30 gaming stations using state-of-the-art equipment. The Esports space also will be open to all students during designated hours for intramural programs and individual student use.

Purdue Northwest will join fellow GLIAC members Ashland University, Davenport University and Michigan Technological University which have established varsity Esports programs. According to the National Association of Collegiate Esports, institutions including Boise State University, Georgia State University, Miami University of Ohio, the University of Utah, and Western Kentucky University have Esports as a varsity program. Newzoo, a gaming industry firm, estimates that Esports has a recorded audience of more than 54 million fans in North America with 75 percent being between the ages of 18 and 34. Esports generated approximate revenue of $1.1 billion in 2019 and has a global audience estimated at 454 million.