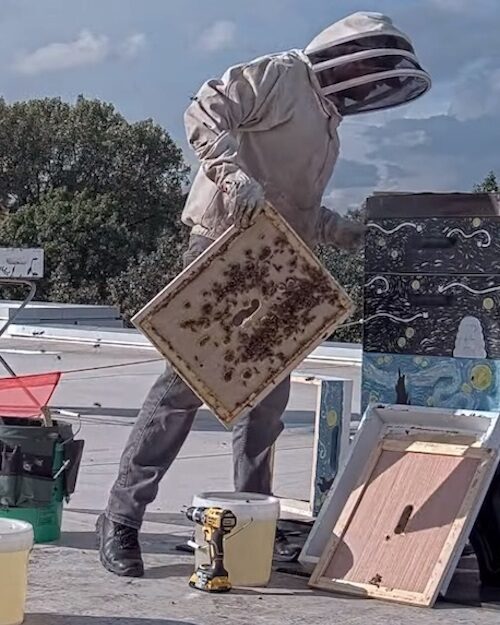 A Purdue University Northwest (PNW) project that fluttered its wings in spring has come full circle with its first ever collection of honey harvested from beehives.

The introduction of eight honeybee apiaries collectively to PNW’s Hammond and Westville campuses and Gabis Arboretum resulted in a sweet conclusion of more than 200 pounds of honey gathered and processed into PNW’s first edition of “Pride Gold” jars.

After tasting the drips of raw honey, I thought ‘that’s the best I’ve ever had'!

With the help of Griffith-based Earthling Bee Company owner Nicky Jones, the two journeyed to the apiaries in early October to gather the first raw product from PNW’s honeybee colonies.

Earthling Bee Company partnered with PNW and donated honey supers, layered with a small amount of beeswax, and honeybees to help kickstart the sustainability initiative.

Using smokers to simmer down the bees, Bachmann and Jones opened up the hives and extracted several supers, which are artificial honey storage trays, to later process through a centrifuge and extract the honey. The honey extraction was facilitated by Ed Rice, president of the Northwest Indiana Beekeepers Association.

With a layer of beeswax remaining, the bees can resume their honey production and generate their food supply once again to last them through the winter.

“I feel it was very successful,” Jones said. “Once you have your first season under your belt, they’ve created all that wax and it’s reusable. It takes at least triple the resources to make beeswax. For us to be able to have all that wax and come up with all those pounds of honey was a win. If they start out of the gate early in the spring on that foundation, then we’re going to make way more honey.” 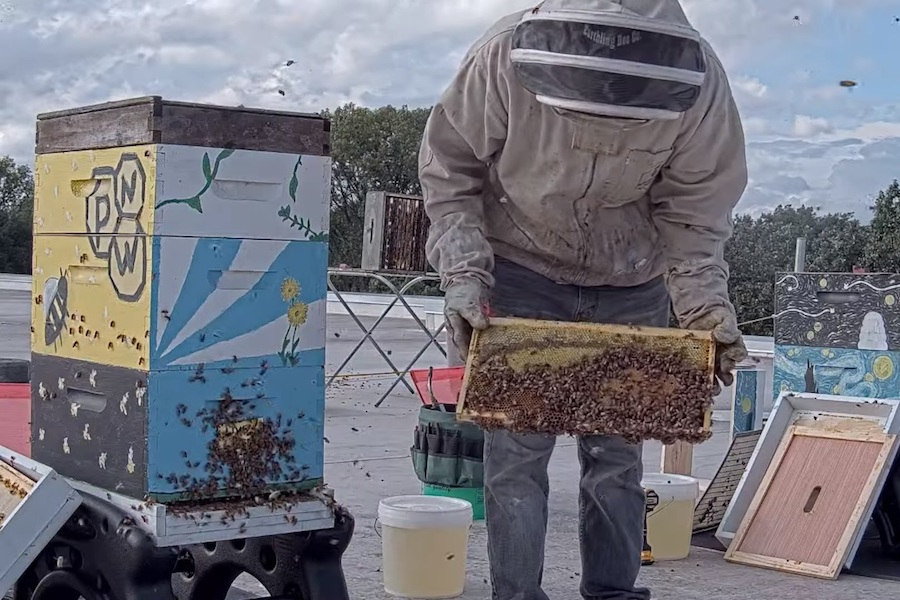 When bees retrieve nectar from plants to bring back to their hives, the material serves the two-fold purpose of making beeswax for honeycomb construction, where the brood is hatched and food is stored, and for the honey production itself. Beeswax is essential to kickstart a hive’s livelihood.

“Wax to a beekeeper is like gold,” Jones said. “When we finish harvesting for the season, we only cut the surface of those wax cells. We take that wax and store it in a safe place. We protect our beeswax above all else. As amazing as honey is, the wax is the most precious commodity.”

“It’s about teaching folks what the honeybee entails,” he said. “Many don’t really know anything about honeybees and beekeeping. We are stewards of the environment and we should want to take care of every living thing, especially honeybees because they pollinate so many things. If you’re eating an almond in the U.S., that was honeybee-pollinated, guaranteed. Citrus in Florida? Honeybee-pollinated.”

The PNW apiaries include two hives at the Westville campus and Gabis Arboretum and four hives on the Hammond campus.