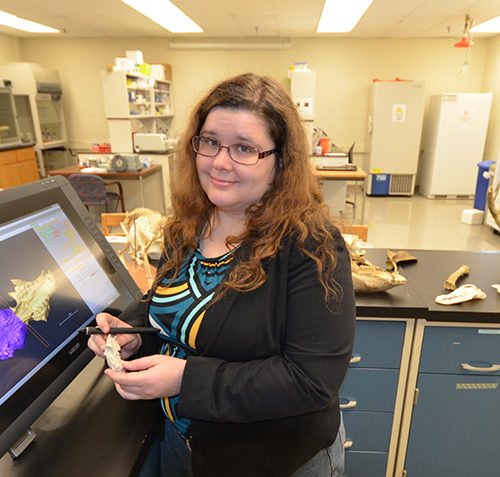 Professor Spaulding’s specialty is mammalian paleontology – this makes her an expert in several major fields of biology; evolution, systematics (how we classify biodiversity), and vertebrate anatomy. Due to her wide array of knowledge, she was able to bring new courses to campus including Mammalogy and Comparative Vertebrate Anatomy.

Currently she is focused on understanding the rise of mammals after the extinction of the non-bird dinosaurs, a project funded by the National Science Foundation. Dinosaurs died out roughly 66 million years ago due to a catastrophic asteroid impact in what is now Mexico.

In the Paleocene epoch (the first time slice of our current era, the Cenozoic) following this mass extinction event, mammals radiated and evolved to occupy many niches previously held by the now extinct reptiles, becoming the dominate vertebrates in most ecosystem. This was a time of great experimentation for our rapidly radiating group.

Among the numerous mammalian fossils from the first few million years after the extinction are the first large mammalian herbivores – some species as large as modern cows. However, it is unclear how these unusual fossils relate to mammals alive today.

Previous work on mammalian relationships has largely ignored these Paleocene species. Spaulding, along with her team, plan to focus on this neglected fossil record from the first 12 million years after the asteroid impact.