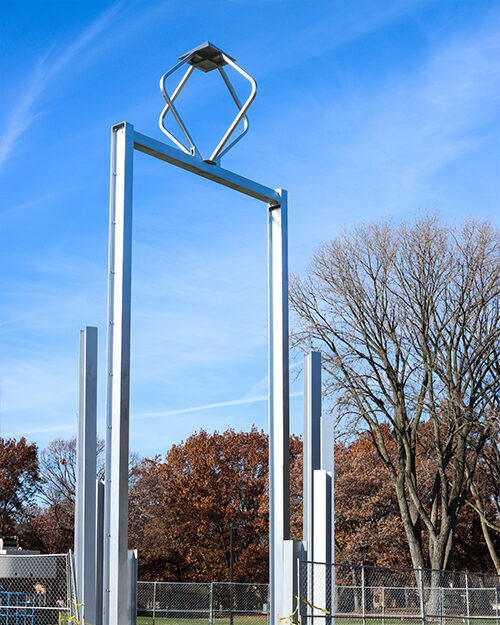 Construction is progressing on a steel bell tower in the southwest part of PNW’s Hammond campus.

What is that construction going on by Lawshe Hall? We can chime in and give the details.

Several years of planning from different groups associated with PNW, from students to senior leadership, have helped make the project possible.

The bell tower concept originated out of a capstone project from the College of Technology, which was furthered along with the help of PNW’s Student Government. The proposal was eventually presented to Chancellor Thomas L. Keon, who supported the idea and worked to help turn the dream into reality.

“We’re really eager to have a visual landmark,” Matt Wells, executive director of Strategic Partnerships and Engagement and Legislative Liaison, says. “Most universities have a carillon or bell tower. It’s going to be a nice central gathering point next to the Nils. K Nelson Bioscience Innovation Building. It’s a testament to the innovation, passion and pride students have for the university.”

The bell tower will be constructed with steel I-beams of various sizes to create a “mountain peak” image. Steel was originally proposed as an homage to Northwest Indiana’s industrial heritage. Several benches will stand at the beams’ base. A fixture on top will hold an electric aluminum bell.

A majority of construction materials are donated. Construction is hoped to be finished in 2022 and in time for spring commencement, Wells says.

“What the students designed was excellent,” he says. “There was little extra work that needed to be done. When you do things like this with a lot of stakeholders, the end result is really satisfying.”