Events and More To Come 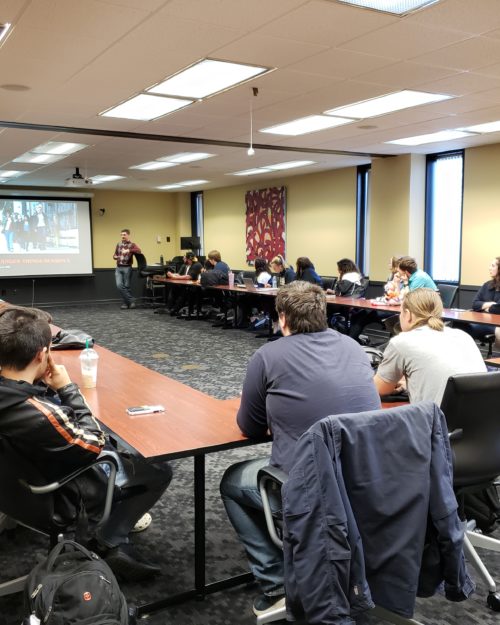 Over the past few semesters, the Department of History & Philosophy has worked diligently to produce many great events. These events—including movies, presentations, and more—had the campus buzzing, were well attended, and got students involved and engaged.

Before the onset of COVID-19 that saw Purdue Northwest implement a number of safety precautions, the Department of History & Philosophy had a full slate of Spring 2020 events scheduled, and luckily, we were able to put on some of them.

In January, we hosted a screening of the documentary, Octave Chanute: Patron Saint of Flight. The documentary told the story of Octave Chanute, an early aviation pioneer who conducted a series of early test flights on the shores of Lake Michigan, near Miller Beach in Gary, IN. The documentary’s producer, Paul J. Nelson, was on hand to do a Q & A about the film and the research that it required.

Towards the end of February, the Department of History & Philosophy held a screening of the 1999 action film, The Matrix. Faculty and students then discussed the film’s deeper themes and philosophical questions after the film’s showing.

In early March, we held a screening of Suffragette, a historical drama about the women’s suffrage movement in England. The film was shown as a part of Women’s History Month, and featured a presentation by the History Club.

In addition to our film screenings early in the semester, March was a month for some terrific presentations. James Hysell presented “Punk: Culture of Protest,” as a part of the “History Matters” series. Mr. Hysell’s presentation explored punk culture and its themes of rebellion and protest, as well as examining what makes something “punk.”

As a part of Women’s History Month, the Department of History & Philosophy hosted two presentations by historian, author, and Director of Faculty at Northwestern University, Dr. Joan M. Johnson. The presentations were entitled “Funding Feminism: Following the Money in the Woman Suffrage Movement” and “Race, Rights, and Feminism in the Woman Suffrage Movement.” Both presentations from Dr. Johnson took an in-depth look at the passing of the Nineteenth Amendment to the U.S. Constitution and what it took to get the amendment passed.

Our final event, before the safety precautions were implemented, was a presentation by Dr. David Detmer as a part of the “Philosophy Matters” series. Dr. Detmer’s presentation looked at the upcoming 2020 presidential election and focused on the records and policy proposals of the candidates who remain in the race. Dr. Detmer’s presentation examined a number of philosophical issues pertaining to political elections and asked deeper questions like, “What are the ethics of campaigning for office?” as well as, “Is everything permissible in the name of winning if you believe you will benefit the country when in office?”

While all of Purdue Northwest has felt the effects of COVID-19, the Department of History and Philosophy is determined to return and continue growing. More events, like film screenings and faculty presentations, will be held this fall.

The History Club and Philosophy Club will be up and running and have great things planned for current and prospective members. We will be making announcements regularly to keep the public informed of what is upcoming. More information about film screenings and other events can be obtained by contacting the Department of History and Philosophy office at 219-989-2347.

Students and faculty can always stay up to date by following the Department of History & Philosophy’s Facebook page. These events are always open to the public, and are a great way to network with students and faculty.