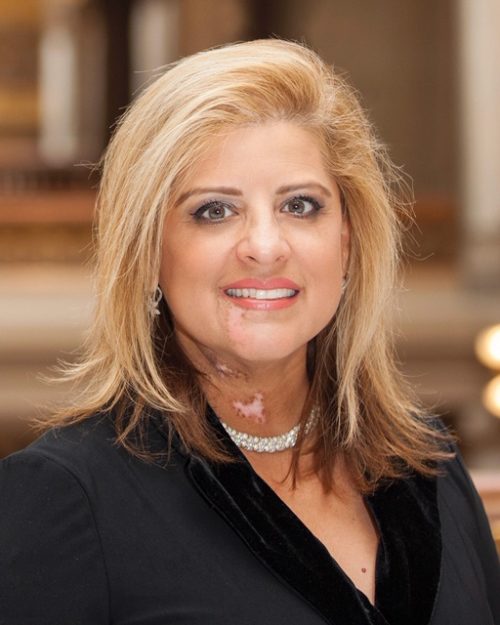 “When I think about the importance of a college degree and the opportunities it has afforded me, I think back to the people in my life who instilled in me a love for education and the confidence to step out of my comfort zone and challenge myself,” said Candelaria Reardon, who went on to share the inspiration she found through her mother.

After an uncle advocated for Candelaria Reardon’s mother to attend school, her mother channeled a passion for learning into a career as an educator spanning more than 30 years, and helped shape education policy in Indiana and the nation.

“My mother, through her example, instilled in me three principles: a love for learning, service to community, and living a life with passion,” she said.

After her own struggles with undiagnosed dyslexia in her early schooling, Candelaria Reardon eventually overcame her disability to graduate college. She since has parlayed her mother’s example into becoming the first Latina to serve in the Indiana General Assembly beginning in 2006. She represents Indiana House District 12, which encompasses all of Munster, all of Highland, and parts of Griffith and Hammond.

“I’m proud to be from northwest Indiana because of people like you. People who come from families like the ones looking on with pride today and people from families that sacrificed for you get to this point in your college career,” said Candelaria Reardon.

“Your pursuit of a degree here today has already changed your life, but it will also change the lives of those around you,” she said. “Now you must channel that work ethic into whatever you choose to do next. Don’t let it fade. A strong work ethic will help you accomplish anything you set your mind to.

“Let that empower you to help others aspire to learn and do more.”

PNW’s 2019 spring graduating class consists of 1,251 candidates, which will include the conferring of two doctoral degrees, 146 master’s degrees and 1,103 baccalaureate degrees. Some 810 degree honorees planned to participate in the four PNW commencement ceremonies.

The graduations also include presentations of a Chancellor Medallion to the graduating senior in each of the university’s five academic colleges with the highest grade point average.

College of Engineering and Sciences