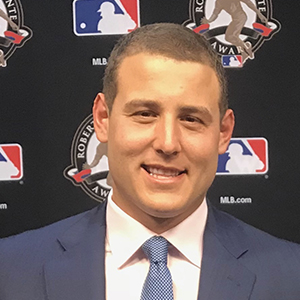 Anthony Rizzo, first baseman for the Chicago Cubs, is a three-time National League All-Star and three-time National League Gold Glove Award winner. In 2016, he led the Cubs to their first World Series Championship in 108 years. Rizzo was named the recipient of the 2017 Roberto Clemente Award, annually given to the player who best represents the game of baseball through extraordinary character, community involvement, philanthropy, and positive contributions, both on and off the field.

Rizzo, overcame Hodgkin’s lymphoma in 2008 and established The Anthony Rizzo Family Foundation in 2012 to support pediatric cancer patients and their families. Anthony Rizzo is considered by many to be one of the most respected players in Major League Baseball.

Registrations for the live lecture closed at noon on Friday, Sept. 18. You can still sign up to receive a recorded version—available for 30 days after each program!

To request a disability-related accommodation, please contact the Office of Equity, Diversity and Inclusion five days prior to the event at edi@pnw.edu, 219-989-2163 (Hammond Campus) or 219-785-5545 (Westville Campus).