Effective Tuesday, Aug. 3, face masks will again be required in all indoor spaces for everyone on the Purdue University Northwest campuses, including students, employees and visitors, regardless of vaccination status. 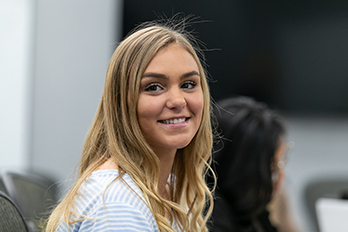 For the second consecutive time, Purdue University Northwest’s (PNW) College of Nursing was named one of 16 “Centers of Excellence” by the National League for Nursing (NLN).

The recognition is given to nursing programs that demonstrate sustained excellence in faculty development, nursing education research, and in student learning and professional development. A four-year designation, PNW was previously named a center of excellence in 2014.

“Our faculty, staff and students earned this recognition together,” said PNW’s College of Nursing Dean Lisa Hopp. “Our excellence is present in our everyday teaching, practice, scholarship and service to our communities.”

“Centers of Excellence help raise the bar for all nursing programs by role modeling visionary leadership and environments of inclusive excellence that nurture the next generation of a strong and diverse nursing workforce to advance the health of the nation and global community,” said NLN COE Beverly Malone, Ph.D. in a release announcing the honorees.

Throughout the four-year designation period, PNW’s nursing faculty and administrators will serve as advisors and role models to other institutions. Their expertise will raise the levels of achievement for various nursing communities.

PNW will be formally recognized at the 2018 NLN Education Summit on Friday, September 14 in Chicago.

About the National League for Nursing

Dedicated to excellence in nursing, the National League for Nursing (NLN) is the premier organization for nurse faculty and leaders in nursing education. The NLN offers faculty development, networking opportunities, testing services, nursing research grants, and public policy initiatives to its more than 40,000 individual and more than 1,200 institutional members, comprising nursing education programs across the spectrum of higher education and health care organizations.