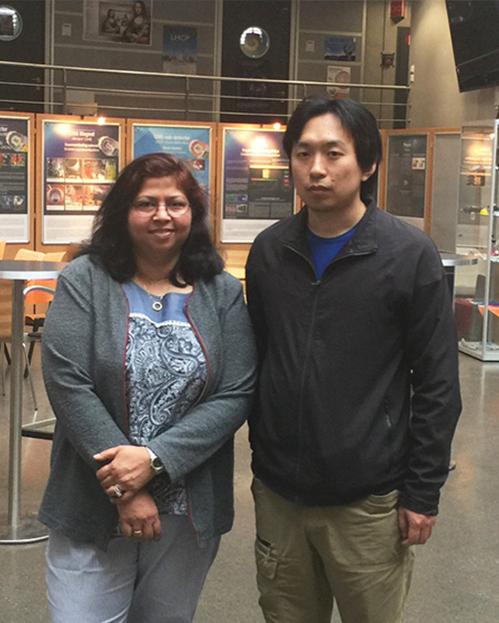 Studying the Origin of the Universe

Purdue University Northwest / Stories / Studying the Origin of the Universe

Finding the origin of the universe through the tiniest of particles has been the life quest of Purdue University Northwest (PNW) Professor of Physics Neeti Parashar. She was recently honored among more than 400 scientific researchers with the 2019 High Energy and Particle Physics Prize awarded by the European Physical Society (EPS).

EPS recognized the work of two research collaborations, CDF and D0 (D-ZERO), “for the discovery of the top quark and the detailed measurement of its properties” on July 15, 2019 in Ghent, Belgium. Parashar is a research scientist on the D0 collaboration.

Teaching in the Chemistry and Physics Department at PNW’s College of Engineering and Sciences, Parashar was instrumental in securing full and contributing membership of the D0 collaboration in 2006. The team is based at the Fermi National Accelerator Laboratory located in Batavia, Illinois, which houses the particle collider accelerator used in the research.

To discover and subsequently make detailed studies of these fundamental particles, you need the right operating conditions of the accelerator. While the top quark was discovered in 1995, the challenge has been to study all of its properties, like mass, width, electroweak couplings, production cross sections, and decay branching ratios.

Understanding these properties accurately will help researchers explore unique information on fundamental interactions at the electroweak breaking scale and beyond.

Subatomic research at PNW isn’t limited to only faculty. Parashar regularly takes her team of  undergraduate students to Fermilab and to Geneva, Switzerland to conduct experiments at the European Organization for Nuclear Research, known as CERN.

“We at PNW are on the global map of scientific discoveries. Purdue Northwest is the only institution in Northwest Indiana with full membership to these world-renowned research labs, and the recipient of peer reviewed, merit-based federal funding from the National Science Foundation to conduct this research.”

Seven years ago, Parashar, who founded and heads PNW’s high-energy physics program at PNW, was also among those on the research team that discovered the Higgs boson, dubbed “The God Particle.” The 2013 Nobel Prize in physics was awarded to Peter Higgs, of the University of Edinburgh, and Francois Englert, of the Universite Libre de Bruxelles, for predicting the existence of the Higgs boson.