Purdue University Northwest will be conducting tests for its emergency preparedness communication systems from Oct. 3 to 7.

CIVS graduate student John Estrada recently earned a Unity Developer Certification. Unity is an interactive 3D platform used by CIVS to create many of the virtual reality and training applications for industry and educational research projects. The certification is an international recognition that demonstrates proficiency and is part of the professional certificate program. John said the certification was one of his short term goals on the path to earning Professional Certificate: programmer, Certified User: VR Developer, and demonstrates a proficient level of experience as a Unity developer.

Unity is a cross-platform game engine used to develop interactive 3D software that was originally developed for the game industry, but is also used for film, automotive, architecture, engineering, construction, and education and training. The engine supports over 25 platforms including PC, web, mobile, and VR among others. CIVS has used Unity to develop many virtual learning applications for both industrial training as well as virtual labs for college and K-12. 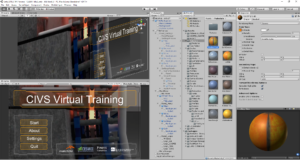