Carpenter, who also earned a minor in applied mathematics, traces his broad interest in his field to his high-school robotics club in New Carlisle, Indiana. While others worked on the nuts and bolts of putting the robots together, he found himself on the programming team, and he loved it.

“We got to work with the whole system—we needed to know everything about how the robots worked,” he says. “We could build on the mechanical team’s designs with sensors and other tools to solve problems they couldn’t.”

When it was time to choose a college, Carpenter found a great opportunity at Purdue University Northwest. The school offered a strong engineering program, and it was affordable and close to home.

The young engineer also found an opportunity to broaden his horizons as part of PNW’s Honors College. Starting freshman year, he met a cohort of promising students from across the university, building friendships sustained through graduation. “I have friends in biology, nursing, English—people I wouldn’t have known at all if I weren’t in the Honors College,” he says.

Carpenter served as the vice president for research on the Honors College Student Leadership Team his sophomore year, working to encourage incoming students to become involved with research. He followed his own advice, traveling to National Collegiate Honors Council conferences in Atlanta and Boston.

In Boston, his team presented their own research exploring the effectiveness of the Honors College in building a support network for a commuter campus. “I enjoyed doing research in things that weren’t my area of expertise,” he says. “It helped me to be well rounded.”

Try as many things as you can, You’re never quite sure where you’re going to end up.

Well-rounded is a good description for Carpenter’s PNW experience. He studied abroad in Rome his freshman year, aided by a PNW scholarship. He spent his junior year in the dorms at University Village at the Hammond campus, meeting a whole new group of friends. He even took advantage of a PNW career fair to land an internship with U.S. Steel, where his experience building apps solidified what he really wanted to do for his career.

Looking back at his time at Purdue Northwest, he encourages incoming students to embrace the opportunities available to them. “Try as many things as you can,” he says. “You’re never quite sure where you’re going to end up.”

Who Was Your Favorite Professor? 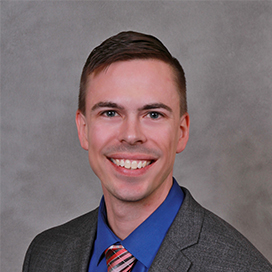 “I had so much fun in his class. He was so smart, and he encouraged me to try hard. I’m glad he did, because it was the foundation of everything we learned later. I remembered it all because Dr. Warren taught me so well.”