PNW Chancellor Thomas L. Keon received the prestigious Sagamore of the Wabash award while being recognized for his 10 years of transformational leadership in Northwest Indiana at the 5.75 Roaring Ahead Scholarship Gala on June 10.

“All of us at PNW could not be prouder of Chancellor Keon and his visionary leadership,” said Lisa Goodnight, vice chancellor of Institutional Advancement and professor of Communication at PNW. “Chancellor Keon’s mark is evident in the numerous accomplishments of our students, faculty, staff and community partners. We appreciate Governor Holcomb for commending the chancellor’s service to our region and to Indiana.

“Furthermore, we are grateful to all our generous donors who attended the scholarship gala. Their participation in the culminating event of our 5.75 Roaring Ahead celebration and their gifts to benefit PNW students show they believe and trust in our students and Chancellor Keon’s vision to carry our metropolitan region to new heights.”


“Chancellor Tom Keon epitomizes what it means to Power Onward through challenges,” said Robert Johnson III, B.S. ‘91 and M.S. ‘96, and president and CEO of Cimcor, Inc. “From modest beginnings, through college as a first-generation student, and a distinguished academic and administrative career, we recognize him for leading one of the most transformative periods in the history of Northwest Indiana and the Purdue University Northwest campuses.

“Under Chancellor Keon’s leadership, PNW has become a key player in our region’s economic development, educational advancement, environmental sustainability and cultural enhancement. He demonstrates the ability to bridge the gap between academia and the private sector.” 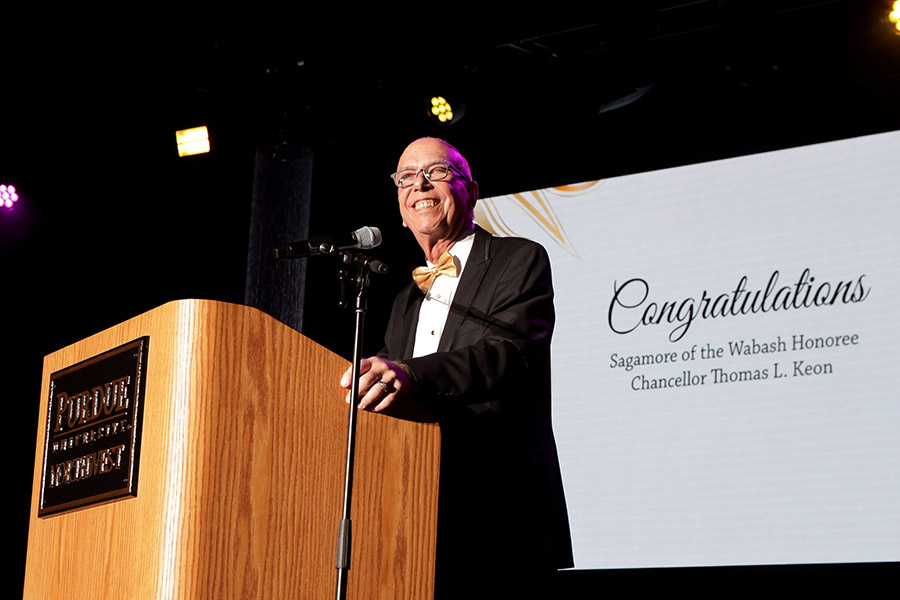 Purdue Northwest Chancellor Thomas L. Keon delivers remarks July 10 after being honored with the Sagamore of the Wabash award.

Keon was recognized for his 10 years of leadership at the university’s helm during the gala, including being awarded with the Sagamore of the Wabash by Indiana Gov. Eric Holcomb.

The Sagamore of the Wabash is one of the highest civilian honors bestowed by a sitting Indiana governor, which recognizes service to Indiana or the governor. Keon was celebrated for his leadership at PNW which includes significant impacts for the metropolitan university and the region.

“I can’t think of a better occasion to recognize Chancellor Thomas Keon for his impactful contributions,” said Holcomb. “Dr. Keon, thank you for your decade of transformational leadership on campus and far beyond that border. Your personal success story is an inspiration to me and probably most importantly to the students you serve so well. You’ve built bridges between academia and athletics, and advanced regional and economic development.”

Gov. Holcomb pointed out several of Keon’s accomplishments, including preparing students for in-demand careers in Indiana, such as nursing, engineering, technology and psychology; the expansion of 17 NCAA Division II teams under Pride athletics; and community partnerships between PNW’s resources and local organizations and stakeholders.

“Chancellor Keon, thank you for your leadership to propel this hometown university to a global talent powerhouse,” said Holcomb. “It couldn’t be more clear that you are the very definition of what it means to be an honorable and true Hoosier.”

Keon was installed in 2012 to lead Purdue Calumet, and later Purdue Northwest, as its chancellor and chief executive officer. He directed the transition from serving a historically part-time student population to providing a robust, full-time student experience highlighted by high-quality academic opportunities, robust student life, and NCAA athletics. That progression also included navigating the complicated merger of two Purdue-system campuses to form the present Purdue Northwest.

Under Keon’s leadership, PNW has seen a nearly four-fold increase in sponsored research, the expansion of postgraduate education offerings and both public and private funding for new construction on both campuses. Notable expansions include the Nils K. Nelson Bioscience Innovation Building, the Commercialization and Manufacturing Excellence Center, the David Roberts Center for Innovation and Design, the PNW Design Studio, the White Lodging Professional Selling Lab, the PNW Community Counseling Center and the Center for Innovation through Visualization and Simulation.

Keon’s leadership has allowed PNW to grow to have an annual impact on the Northwest Indiana regional economy close to $746 million. He has maintained strong relationships with local civic and nonprofit leadership. Keon’s leadership helped PNW secure its largest gift in history: the $12 million donation of the 300-acre Gabis Arboretum at Purdue Northwest.

Because of my roots and because they’re so much like Northwest Indiana, I just have this burning desire all the time to make sure that the young people here have a great opportunity for an education.


Most recently, Keon’s involvement with a region-wide grant application for the Northwest Indiana Forum’s “Ignite the Region” economic development plan helped secure $50 million for Northwest Indiana in Regional Economic Acceleration and Development Initiative (READI) grants. A $3 million private gift from PNW alumnus David A. Roberts and his wife, Susan, matches an earmarked $5 million in READI funds that will go toward the future Roberts Impact Lab at PNW, a collaborative workspace for education, entrepreneurship and innovation.

Keon noted that among his goals is to ensure people in the region have access to “the best quality university in Northwest Indiana that we can imagine.” 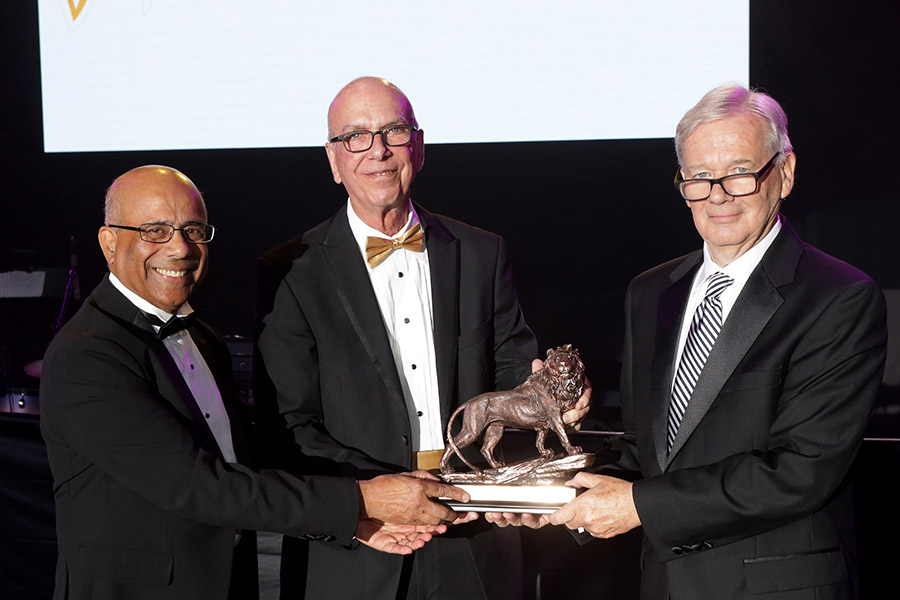 David Roberts, right, a 1974 PNW alumnus, was honored July 10 as the inaugural member of the new PNW Alumni Hall of Fame. Also pictured are Chancellor Thomas L. Keon, center, and Niaz Latif, dean of the College of Technology at PNW.

David Roberts, a 1974 graduate of Purdue Northwest, was honored during the gala as the inaugural inductee to the PNW Alumni Hall of Fame. Roberts, a native of Steger, Ill. and Marine Corps veteran, was selected from a pool of nominations and recognized for his professional achievement and leadership, impact on the communities he’s worked and lived in and his continued engagement with PNW to support scholarship, development and outreach.

Roberts and his wife, Susan, generously pledged a gift of $100,000 at the gala to match funds PNW raised ahead of the event.

About the 5.75 Roaring Ahead celebration

PNW’s yearlong 5.75 Roaring Ahead celebration commemorated the fifth year of PNW and the 75th year of its legacy campuses, Purdue Calumet and Purdue North Central. Events throughout the year reflected on PNW’s transformational and impactful presence in the region as its premier metropolitan university supporting academic excellence, community partnerships and diversity.

Purdue Northwest thanks the following sponsors for their generous gifts to support student scholarships for current and future PNW students. 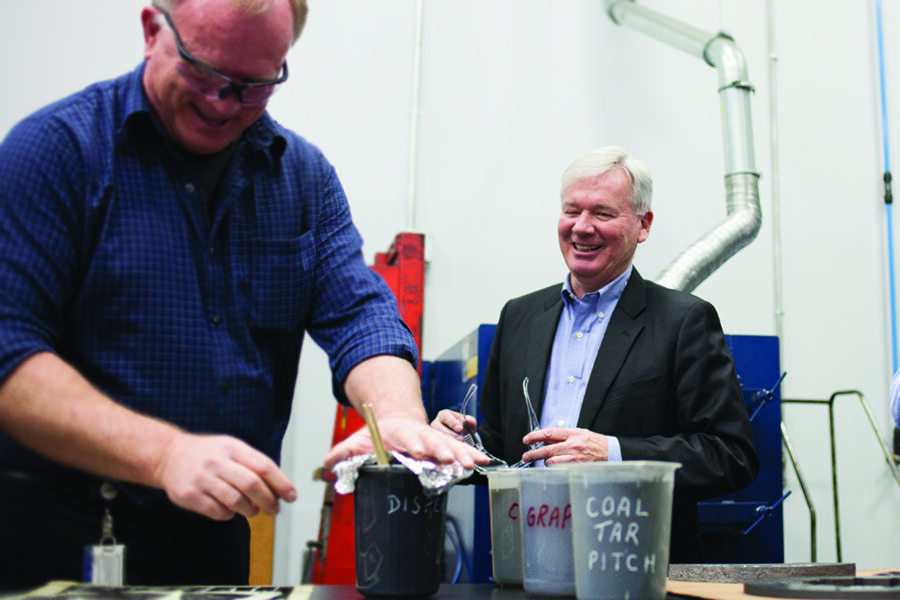 Purdue University Northwest (PNW) has selected David A. Roberts, ’74, as the first honoree to the university’s new Alumni Hall of Fame.

Read About Honoree David A. Roberts