Originally launched in 2005, the Society of Innovators celebrates the spirit of creativity and ingenuity by discovering, honoring, and saluting innovators from across the seven-county region of Northwest Indiana. Dedicated to the idea that anyone can be an innovator, the Society recognizes that innovation is the key to 21st Century competitiveness. 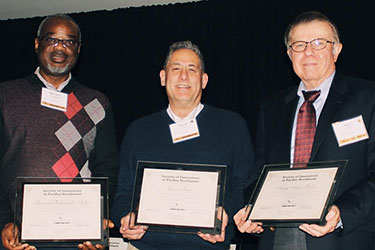 The Society of Innovators at Purdue Northwest has announced winners of the 2022 Innovators Awards. Winners were honored for innovations that provide a new solution, benefit society and create measurable value.

The Society recognizes exemplary individuals who have made it through the selection process as Inductees into the Society of Innovators. Anyone that lives or works in Northwest Indiana is eligible for consideration.

This award is the Society of Innovators’ highest honor for an individual leader. The award will not be given every year, but rather will be presented as the organization’s Board of Directors identifies deserving candidates. It is open to any individual whose work took place in or significantly impacted the Northwest Indiana region.

The award was renamed to honor John H. Davies who was recognized as the Society’s inaugural Lifetime Achievement Award recipient in 2019. As the founder and retired managing director of the Society of Innovators, he successfully led the organization from its inception in 2005 until 2018. Davies was also instrumental in relaunching the South Shore poster series in the late 1990s and worked with the South Shore Convention & Visitors Authority Northwest Indiana (SSCVA) to create the Wall of Legends in 2004. A self-proclaimed champion for Northwest Indiana, Davies was one of the first to say that innovation exists in the region. He was responsible for driving a culture of innovation here.

One team may be selected annually upon recommendation of the Selection Committee and Board approval, from among Team Inductees to receive the Richard C. Sussman Prize for Team Innovation. The Sussman Prize is dedicated to promoting 21st century innovation in the private, public, not-for-profit and government sectors. The Sussman Prize is to be considered a traveling award and is to be held by the recipient(s) for one year or an equivalent partial year as determined by the Board of Directors.

The award was created to honor the late Richard C. Sussman PhD, former chairman for the Society of Innovators and head of the Research Laboratory at ArcelorMittal East Chicago. Sussman is credited for pushing creativity, innovation and entrepreneurship as critical elements to remain competitive. This award builds on his legacy for a stronger Northwest Indiana.

“Richard would be please beyond words that the Society has chosen to name its top team award after him,” said Pamela Sussman. “He was a modern-day renaissance man. Richard received many awards for his professional expertise in metals, especially steel, and also for his leadership in community and charitable organizations. Of these, dearest to his heart was the Society of Innovators, which he chaired for many years, and its annual presentation of awards to Northwest Indiana leaders in creative thinking and execution. Our children, grandchildren, and I very much appreciate this fitting tribute to him, along with the thoughtfulness and care that has gone into the innovative design of his namesake award.”

All inductees into the Society have earned their innovation wings. The Chanute Wings lapel pin was created to honor the path-breaking glider flights on our lakeshore by Octave Chanute and his team who helped the Wright Brothers “get off the ground” seven years later.

Up to two co-recipients were selected annually from among the Society’s award winners to receive the Chanute Prize for Team Innovation. The Chanute Prize was dedicated to promoting 21st century innovation in the private, public, not-for-profit and government sectors. It honored the path-breaking glider flights on our lakeshore by Octave Chanute and his team who helped the Wright Brothers “get off the ground” seven years later.

Originally recognized as the Accelerating Greatness Award for Team Innovation.

Our regular e-newsletters shares updates on local innovators, tools and resources you can use as well as a calendar of upcoming events across the region!